Method:
1. Slice aubergine into half cm slices, discarding the head
2. Slice Courgette into small chunks
3. In a dish, mix 2-3tbsp olive oil with herbs, before coating aubergine and courgette before leaving to marinate for 30mins
4. Add 1/2 tbsp olive oil to another pan, and roast the aubergine for 3-5 mins on either side
5. Cook pasta as instructed
6. Add courgette and aubergine to a pan on a medium heat for 5 mins, until the courgette softens
7. Add chopped tomatoes and seasoning and continue to cook for a further 5 mins

Whilst the bright green colour of the dish can prompt thoughts of artificial colouring, this is actually the result of cooking and blending.

Method
1. Begin by cooking the Linguine as instructed on the packaging
2. Thoroughly was the kalette tops, before removing from stems
3. Peel (but don’t chop) the garlic
4. Add the kale and garlic to the linguine pan, for the final five minutes of cooking
5. Drain the linguine, and carefully transfer the kale and garlic to a blender. Add the olive oil, sour cream, lemon juice and seasoning before blending until smooth
6. Mix the linguine and kale sauce until thoroughly coated
7. Season and top with parmesan 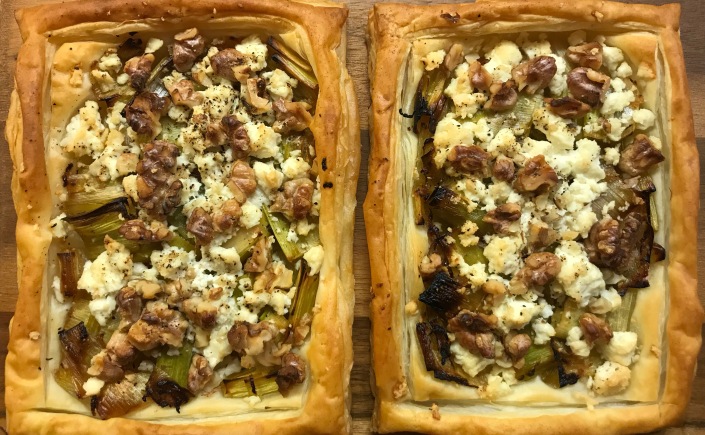 This simple, yet stunning recipe is a real hit for a light lunch, that might just transform the way you see leeks. The crunch from the walnut, counters the softness of the leeks and goats cheese, whilst the lemon gives it that little tang. Perfect on its own, or with a side salad.

Method:
1. Pre-heat oven to 200 degrees
2. Begin by washing then finely chopping the leeks, discarding the green bits and stalk
3. On a medium-heat, add the butter and leeks and stir until the leeks are tender
4. Zest two lemons, then add to the leek mixture along with the thyme
4. Roll out the puff pastry, cut into four equal rectangles, then score each rectangle 1cm from the edges
5. Add leek mixture in the centre of the pastries, then top with crushed walnuts and crumbed goats cheese
6. Brush the crust of the tarts with olive oil, then bake in the centre of the oven for 15 mins 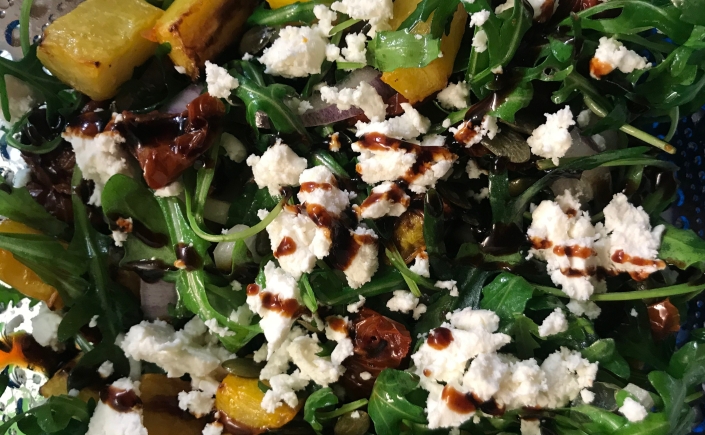 Slightly sweeter than traditional beetroot, the golden beet is a wonderful additional to winter salads. This mouthwatering recipe is packed full of nutrients, and is topped with a sweet balsamic glaze and feta cheese.

Method:
1. Preheat oven to 180 degrees
2. Wash (but don’t peel) golden beets, wrap them in kitchen foil then cook for 35 mins
3. Meanwhile, finely slice red onion and sun-dried tomatoes
4. Carefully toast the pumpkin seeds, in a pan on a medium-heat (no oil) for five mins
5. Once the golden beets have cooled, remove their skin and cut into small chunks
6. Layer the veg, then top with seeds, feta, olive oil and balsamic glaze

Method:
1. Start by cooking the pasta as instructed on the packaging
2. Peel and chop the onion
3. On a medium heat, add the olive oil then once hot, the onion. Stir for a few mins until tender and browning
4. Add the sliced mushrooms, pasta and homemade pesto, stirring until completely covered
5. Serve with walnuts and seasoning

Quiche is a dish that can always be found on the buffet table, but is super easy for a light lunch. This cheddar cheese and leek quiche is a real hit and whilst we’ve listed how to make your own pastry, there are of course the shop-bought options!

Method
1. Pre-heat oven to 180 degrees
2. Start by preparing the pastry. In a large bowl, mix the cornflour, flour and butter. Knead the dough with fingers before adding water (start with 20ml and increase if needed). Once the dough has formed into a ball, wrap in cling film then let cool in the fridge for 30 mins
3. Carefully wash the leeks then slice white parts into small pieces
4. Heat 2tbsp olive oil in a pan on medium heat, then add the leeks for 10-15 mins, stirring frequently
5. Roll out the dough, shape into a large rectangle mould then bake for 10mins
6. Add the leeks onto the pre-baked pastry, then add cheddar and seasoning
7. In a small bowl, mix the egg with cream and a tsp cornflour
8. Pour egg-cream mixture on top of the quiche, then back for 30 – 40 mins

Nothing is as good as a soup for cold winter evenings. Whilst some find soup a little boring, the secret is unlimited combinations for soups. Soups are also a great way to make use of some of the less noble parts of vegetables – such as the green parts of leeks – or in the case of this recipe, Brussels Sprouts Tops Stems. The leaves were using for a gorgeous pesto recipe which can be found here.

Method:
1. Peel the carrots and celeriac, then cut into small piece
2. Slice the sprouts tops stems
3. Add the vegetables to a large pan, along with the vegetable stock (boiling)
4. Cook on a medium heat for 30 minutes
5. Blend to desired consistency then serve with warm crusty bread and a dash of cream

Rosti’s – or more appropriately vegetable cakes – are an easy way to get more veg into your diet. This recipe uses kale, sweet potato and leeks and omits egg which is traditionally used to bind the mixture.

Method
1. Peel and grate sweet potato
2. Wash leeks and kale, then thinly slice
3. Steam all the vegetables for 15mins
4. Mix the remaining ingredients together (if using egg, add one here and mix well)
5. Using a round cookie cutter, split the mixture into evenly sized rosti balls on a baking tray
6. Sprinkle with paprika, then bake for 15mins at 180 degrees
7. Serve with salad and eaten hot or cold 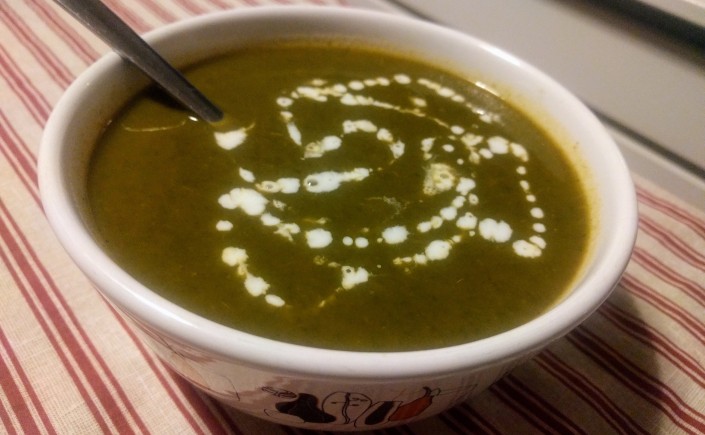 It’s obvious that none of us want to see food go to waste, so with a little creativity – like this recipe demonstrates – you’ll be able to reduce food waste, and save a few pennies. This recipe makes use of the turnip greens which are usually thrown away. The result is a delicious soup and a great feeling of knowing the ‘unwanted’ is now wanted!

Method
1. Thoroughly wash turnip greens once they’ve been cut off the bunch
2. Slice greens thinly
3. In a pan, heat oil and stir fry greens on a medium heat for 5mins
4. Meanwhile, peel the potato and parsnip and slice into small cubes
5. Add veg stock to the turnips greens pan, before adding potato, parsnip and puree
6. Cover with a lid and simmer for 25mins, before blending to desired consistency 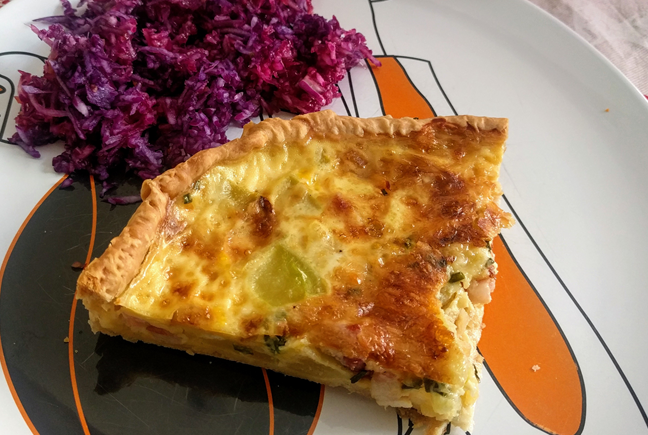 Autumn is the season for squashes and this recipe certainly doesn’t disappoint. Serve with cabbage or greens for a light supper.

Method
1. Pre-heat oven to 180 degrees
2. In a large bowl mix corn flour, self raising flour and butter
3. Knead the dough with fingers before adding water
4. Once the dough has formed into a nice ball, wrap in cling film and place in fridge for 30mins
5. Cut the squash into small chunks, removing skin and seeds
6. Boil in a pan of water for 15mins
7. Roll out the dough into a mould and bake for 10mins
8. Spread squash onto the dough
9. Add pancetta (if using), grated cheese and seasoning
10. In a separate bowl, mix the eggs and cream then pour on top of the quiche
11. Bake for 30 – 35 mins