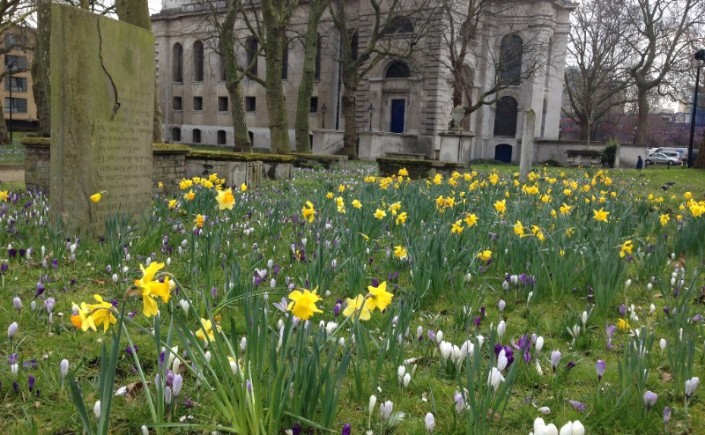 For those of you who are somewhat social media-phobic, over the last few days we posted the above photo on Facebook asking for guesses to where our newest collection point is. We had some good guesses (and can definitely see how it does resemble those other suggestions) but congratulations to the two persons who got it right – we will be giving both of them a box instead of just one!

The photo deliberately cuts off the bell tower (which does occasionally ring all night due to timer malfunction almost ending up in a minister-in-pyjamas-up-the-tower episode) but for most years (bar this really weird weather we have had which saw daffodils in January and hail in March) it lays on probably the best crocus carpet display in all of Tower Hamlets. Definitely worth checking out!

St Anne’s Limehouse also has a great Christmas Eve children’s crib service (if you have unruly kids, have no fear, those porcelain figures have been shattered and put back a number of times) and a midnight candlelight service with candles all around the balcony. Check out their upcoming events on their term card and like them on Facebook to keep up to date!

And before Sunday pick up a Mother’s Day card and gift from our very own local Snap Store especially if you are picking up your box from The Coffee Room in Mile End (who just turned two – how did we ever survive without Italian coffee of this quality) or checking out the hot-out-of-the-oven newborn Pizza Room baby sister just a few doors down.With the combination of produce in the box this week, why not make mum this roasted chicken with jerusalem artichoke and lemon by Ottolenghi. Substitute the shallots for quartered red onions, black peppercorns for the pink, roughly slice the lemon and through in whole garlics if you are lazy, add some potatoes under the chicken and you are all good to go!

At its best the Jerusalem artichoke literally shines translucent with all the glorious flavours, underpinned by its initial lemon bath, with a delightful tender texture but still retaining a bit of a bite.

Goes well served over plain cous cous and olive nibbles. Go easy on the olive oil, as chicken thighs are quite fatty and makes it quite rich – balance it with an steamed cabbage side dish and/or a kohl rabi, beetroot and blood orange salad, and you could also add the grapefruit and celeriac from past weeks that didn’t get eaten…

Happy Halloween from us! 🎃🪓🧛🏻‍♀️🦇🧟🕸🔮🧙🏻‍♀️⚰️🕷🎃
Beetroot and Ginger Soup from @chilli_and_garlic .
You can’t beat a good burger 🍔 can you? Served here with our Lettuce from @chilli_and_garlic .
Honey Roast Chicken Thighs with Mixed Veg from @the601kitchen .
Jerusalem Artichokes and Chard called for this @nigelslater recipe. Culinary credits to @nickmcb1 .
TGH Carrots and Cucumber for this delicious Sushi Feast by @egorskirivers .
My Tweets