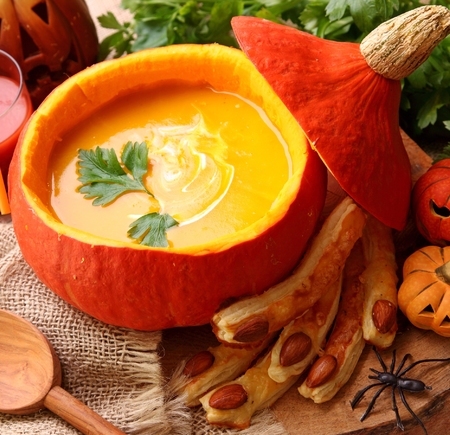 Boo! No prices for guessing but it’s Halloween this weekend but no tricks are planned for this week’s box, just the usual treats!

Do what you may to your (organic) pumpkin but rest assured we will be eating it, and one carved with eyes and nose and mouth won’t do much good in holding the pumpkin briyani (not to mention pumpkin soup) that we will be holding vigil over. Although come to think of it, a pumpkin sans top and seeds will probably make a good tealight holder to light up the darkness and a romantic meal, before you get around to cooking and eating it of course.

As for your turnips, they are not as common here as across the Channel, where our frog friends recommends adding these to stews as you would other root vegetables. They have a mild flavour and potato-like texture when cooked, making them ideal for soups, stews, and casseroles. The colder spell most definitely calls for Lancashire hotpot or for the Gloucestershire hotpot variation with pork, apples and juniper berries instead. Also perfect for a winter vegetable soup with chorizo and puy lentils.

For something other than stews and soups, why not try making some crispy turnip fries or caramelised turnips, potatoes and carrots with onions and thyme. Turnips can also be eaten raw in salads or coleslaw, even in sprouted form. For lots more on turnips check out this article for more recipes (roasted turnips and mashed root vegetables with horseradish) and nutritional information (lots of cancer-busting goodness in turnip if you are still eating all those gloriously carcinogenic sausage, bacon and ham).

Bet you never put broccoli in the oven so how about a broccoli roast for a change?